JFS Marks a Year of Enhancing Programing for Holocaust Survivors

As an Executive Director, on any given day you can be in receipt of notification about a grant opportunity. The majority you rule out for some reason. But according to Howard Olshansky, Executive Director of Jewish Family Services, “This one completely grabbed my interest.” 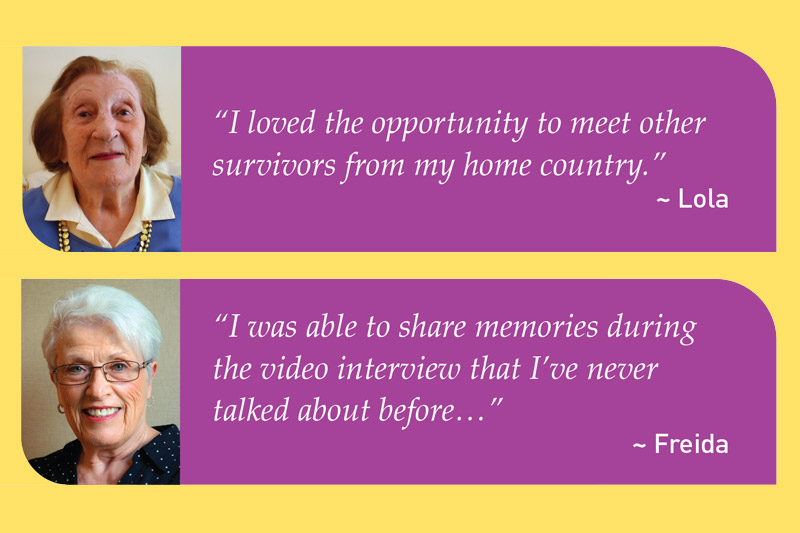 As an Executive Director, on any given day you can be in receipt of notification about a grant opportunity. The majority you rule out for some reason. But according to Howard Olshansky, Executive Director of Jewish Family Services, “This one completely grabbed my interest.” It was from the Jewish Federations of North America’s Center for Advancing Holocaust survivor Care and was all about enhancing the quality of life for a community’s Holocaust Survivor population utilizing a trauma-based approach. “I had only been with JFS about a year but one of the things that struck me was the gap in resources available to engage individually with our community’s survivors and enhance their connection to the community and with each other.”

This month will be a year since JFS was awarded a substantial grant from JFNA with three primary focus areas:

Over the past year, spearheaded by Sheryl Gerrard and Dana Kapustin, who work in JFS’ Department for Senior Engagement services, JFS has been overwhelmed at the level of interest and engagement from our community’s survivors. Through JFS’ outreach efforts, along with support from our community partners, JFS has been able to identify and engage 30 survivors in our community, some that we didn’t even know were living here, increase the participation of our survivors in community programs and, most significantly, hear and learn about their life experiences before, during, and since the Holocaust.

The response from our survivor community to the events of the past grant year have been overwhelmingly positive. Comments such as “I appreciate being connected to this community since I’ve been so lonely” and “You’ve done a great job in recognizing us and helping us feel heard,” support the mission of the grant. For example, at the dinner prior to the Kristallnacht program, families were seated by country of origin. At a table for Russian- speaking individuals, one couple who recently moved here from Cleveland, were introduced to Marina, one of our survivors, who also lives here but had lived in Cleveland many years ago. As they explored their histories they realized that Marina was actually good friends with a relative of theirs. Small world! Marina had previously expressed feeling isolated and sad that she did not have many Russian speaking contacts.

As this article is being written, JFS was pleased to learn that we have been awarded a 2nd year grant to continue this work. We are excited to have the unique opportunity to expand social opportunities, enhance our engagement with our caregivers and continue to provide opportunities for survivors in our community to document their legacies.